Hale began as an idea when chef Angela Wiegard and professional athlete Jarryd Blair met while working at the Collingwood Football Club in Melbourne.

Angela had already developed a keen interest in the energy needs of athletes from her previous work creating food for elite cyclists. Having grown up in a sporting world, with a father who was an Olympian, her signature is delicious flavour combinations that are packed with natural goodness.

For Jarryd, as his skill and experience as a professional athlete developed he realised that often he ate only what he thought would help him get through a long training day, or the next game, but not necessarily what tasted good. He came to understand that if what you eat were a pleasure and not a chore, you would gain more from it. The first incarnation of Hale was designed for and tested on a group of riders in Melbourne. Since then Angela has continued to talk to cyclists and other athletes at all levels about what they wanted to eat and at what times, while always making sure the bars met the energy levels they needed.

Over the last four years the bars have been refined until feedback from testers and friends alike convinced the pair that Hale was ready to go onto the market.

Angela and Jarryd found a shared interest in finding out what athletes really want to eat, not only from a nutrition or energy-needs point of view, but what made them feel good emotionally and mentally. And the end result is Hale. 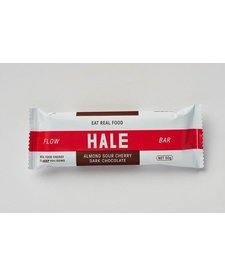 HALE FLOW BAR
$4.50
These bars hit the perfect note when you want to charge your batteries for long hours of training, fuel up for the next race or get prepped for your workout. Flavours are layered to keep your mind and body focussed, fuelled and interested, even if it’s ju 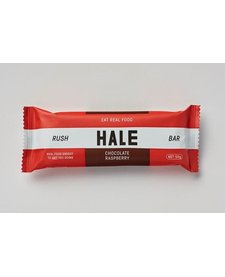 HALE RUSH BAR
$4.50
An anytime, anywhere bar for game day, pre spin class, when you’re waiting for the next set to roll in or it’s half time and you need something extra to push you through to the end. Easy and fast to digest, this bar will give you the refuelling you need t
By using our website, you agree to the usage of cookies to help us make this website better. Hide this message More on cookies »
Powered by Lightspeed